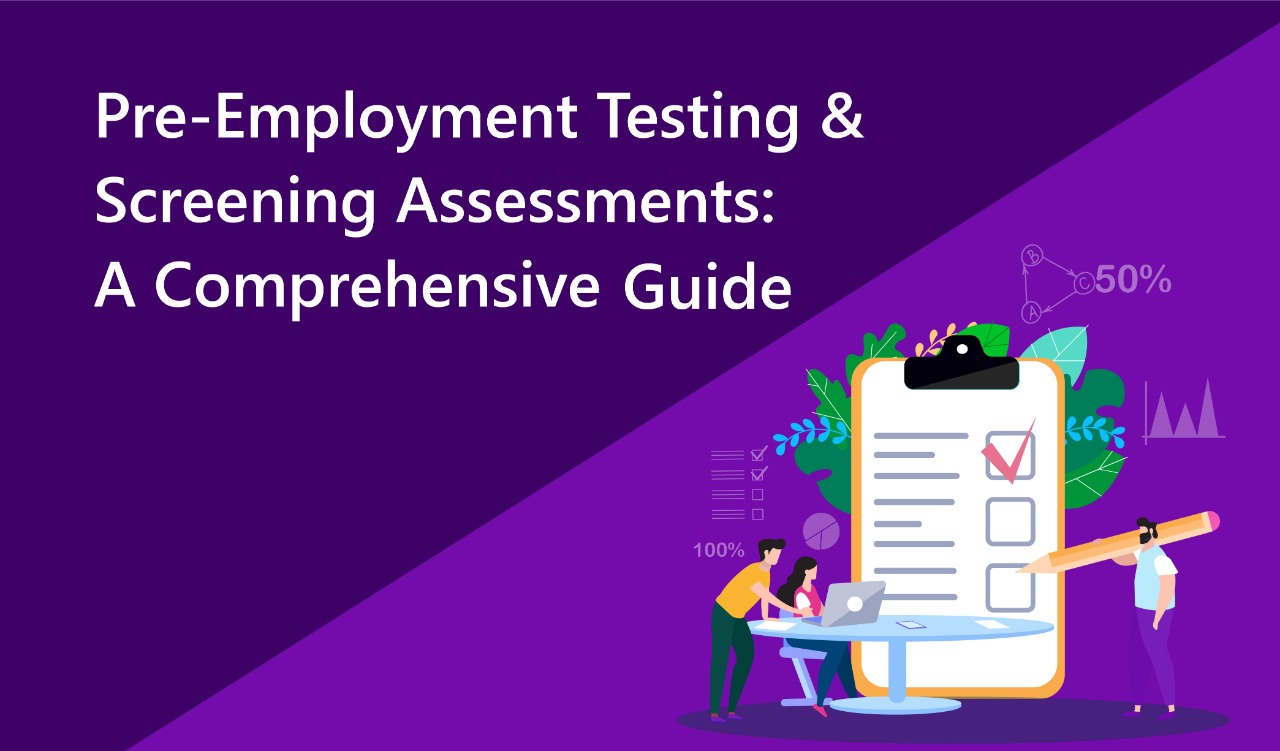 What Are Pre-Employment Tests?

Based on the type of the test being used, pre-employment tests can unveil relevant information on an individual’s ability to perform in the workplace, allowing companies to hire the best-fit candidates and screen out those who are unqualified.

Why do Companies Use Pre-Employment Tests?

Pre-employment tests are becoming immensely popular in recent years as they help companies identify the candidates most likely to perform well on the job. Psychology Today reveals that about 80% of Fortune 500 companies use pre-employment testing as a recruiting strategy, which in turn helps them save money and time, increase productivity, decrease turnover and improve morale.

According to a survey by the American Management Association, “Almost 90 percent of firms that test job applicants say they will not hire job seekers when pre-employment testing finds them to be deficient in basic skills” (Greenberg, 1996, p. 24).

There are a couple of pre-employment tests that serve as useful tools for recruiters:

Personality tests are one of the most commonly used pre-employment screening tests. Personality tests that are specifically designed for the hiring process measure characteristics such as interests, emotional adjustment, attitudes, interpersonal relations and motivation to assess whether the candidate will be a good fit for the job and the company.

Usually companies use the most widely accepted taxonomy of personality among industrial-organizational (I/O) psychologists – the Big Five personality traits: Agreeableness, Conscientiousness, Extraversion, Openness (to Experience), and Stress Tolerance. These traits reveal if the candidates will excel in the role and stay long-term. For example, event planners who score high on openness and extraversion tend to better.

Other personality tests, however, like the DISC and the Myers-Briggs shouldn’t be used in the pre-employment process as they are not validated for this purpose.

Cognitive aptitude tests are used by organizations to measure a candidate’s memory, arithmetic skills, reading comprehension, reasoning as well as knowledge of the job role. While they only measure general intelligence or brainpower, cognitive aptitude tests indicate how well the candidate thinks critically, learns new skill and solves problems.

According to LinkedIn Learning’s 2020 Workplace Learning Report, the three highest-priority skills employers need in candidates are leadership and management (57%), creative problem solving and design thinking (42%) and communication (40%). And it is not possible to assess these skills solely on the basis of resumes and interviews. This is where aptitude tests step in to help.

With their application in almost any occupational context, aptitude tests are, unsurprisingly, the most accurate predictor of job performance. They can even help employers identify candidates who may have been ignored based on their resume alone, but who demonstrate high potential in the long-term.

With their application in almost any occupational context, aptitude tests are, unsurprisingly, the most accurate predictor of job performance. They can even help employers identify candidates who may have been ignored based on their resume alone, but who demonstrate high potential in the long-term.

Situational judgement tests, often abbreviated as ‘SJTs’, are designed to determine how well candidates prioritize, follow the instructions, and handle unpleasant situations in the workplace. Commonly used as a pre-employment test, they present candidates with different scenarios that they might experience in the job they’re applying for.

For each situation, the candidate is suggested a number of possible actions, out of which they have to choose the most effective course of action – the action they would take if they encounter a similar situation. SJTs invariably reflect the real-life aspect of the job.

A variety of organizations are using situational judgement tests as a part of their recruitment process. Some examples include Deloitte, Walmart, Waitrose, the NHS, and Sony.

Pre-employment physical ability tests are conducted for prospective employees in the manual and physical labor sectors to assure companies they are mentally and physically able to take on the job responsibilities.

Many employment-based legal battles often stem from these physical ability tests as women, elderly and minorities usually become the victim of inequitable or uneven testing. It is, therefore, important for employees to understand the laws set out by the ADA to protect them and recognize employer discrimination when it occurs.  Also remember that in case of any injury incurred during a physical ability test, the employer will be liable for it.

Emotional intelligence, also known as Emotional Quotient, is the ability to understand and manage your and other people’s emotions. EI is a valuable skill that helps improve problem-solving, management, communication, and relationships within the workplace.

In fact, according to Harvard Business Review, emotional intelligence comprises nearly 90 percent of what sets apart high performers from their fellows with similar technical and skills. This is why, 75 percent of recruiters surveyed by CareerBuilder valued EQ over IQ.

Pre-employment emotional intelligence tests help organizations identify which candidates possess better relationship management skills and have a strong control over their emotions, and thereby will perform better in the job role.

If a pre-employment test is well-validated, it doesn’t mean it has received a stamp of approval or has undergone certain standardized qualifications for validity.

Test validity of a pre-employment test is merely an objective measure that provides proof of the assessment being able to actually measure what it purports to measure. A pre-employment test has predictive validity if there is an evident relationship between test results and job performance.

A number of validity measures are used to validate pre-employment tests. Here we list down the most important of them all:

Construct validity is used to find out how well a test measures what it is supposed to measure. It is usually authenticated by comparing the test to other tests that measure similar attributes.

Content validity evaluates how well the items on a test are relevant to the skills and capabilities required for the job role. In order to ensure the content validity of a pre-employment test, it needs to make sure that the test content reflects the knowledge required for a particular position.

The most powerful way to establish a pre-employment test’s validity is by criterion validity. However, it is more difficult to measure compared to other types of validity because it requires large sample sizes for each position.

Also known as concrete validity, criterion validity indicates that the test demonstrates a correlation or other statistical relationship between test performance and job performance. When it comes to pre-employment tests, the most frequently used variables are test scores and a particular business metric, such as retention rate or employee performance.

From streamlining the hiring process to strengthening an organization by ensuring the new employees will be successful in their roles, pre-employment tests offer a multitude of benefits. They help organizations align their recruitment process with the desired business outcomes, such as reduced turnover, increased sales, and higher customer satisfaction.

However, the most important benefits that a company may reap by adopting an effective pre-employment test include:

• Improving the quality of hire

Well-validated pre-employment tests offer the highest accuracy when it comes to predicting future job performance and productivity. They help companies identify the candidates best-suited for the role and the organization and thereby, predict the employee’s productivity across a broad range of industries.

Pre-employment tests take into consideration the knowledge, abilities and skills that the new hire possesses and thus accurately predict how they will perform in the role.

The hiring process can be unbelievably time-consuming. According to Recruiterbox, it typically takes around 45 days to fill a new position. This is not due to a dearth of applicants, but because of the rapidly increasing applicant pools that make it hard for recruiters to sift out the best candidates from a sea of resumes. However, companies can significantly streamline their recruitment process by making pre-employment assessments a part of it.

With the right pre-employment testing, hiring managers can weed out the incompetent candidates early in the process, cutting both time and cost to hire.

Resumes alone can be roadblocks to a more diverse workforce. An excellent way to avoid resume hiring bias is by administering a pre-employment test to a candidate and then reviewing both the candidate’s results and their resume.

Using pre-employment testing, hiring managers can make decision on hard facts rather than on a resume that may incite bias. For instance, a black woman applies for a job in a company whose workforce is predominantly white men. By just going through her resume, the recruiter would know her gender – case goes worse if she has attached a picture too – and subconsciously assume that she’s not the right fit for the company.

In contrast to that, if the same candidate scores well on a pre-employment test, the hiring manager would deicide to go ahead with her. Most of the pre-employment solution providers are now using AI to eliminate bias from the recruitment process. The use AI can help companies in making sure that the unconscious bias is taken out of the equation.

• Improving the legal defensibility of your hiring decisions

In addition to helping a company improve its business outcomes in countless ways, pre-employment testing also boosts the equitability, objectivity, and legal defensibility of a company’s hiring process. This is because the pre-employment tests governed by federal guidelines ensure equitable and non-discriminatory hiring practices are utilized.

Employers are always on the lookout for ways to retain their top talent and decrease employee turnover. And pre-employment testing can help them do that. Pre-employment tests allow employers to evaluate if the new employee has the basic aptitude required for the position along with the appropriate personality, to perform efficiently at work. This works in favour of both the applicant and the employer. The employer determines if the candidate is the right fit for the position while the candidate chooses to move forward or not depending on their skillset or if they are ill-equipped for the job role.

Everyone wants to be given a fair shot. When you have a pre-employment assessment in place, you put all candidates in the same boat, giving everyone a level playing field.

These tests offer candidates an opportunity to influence the decision-making process, showcase their true talents and skills, and present a more complete picture of their abilities. This enhances the candidate experience and ensures they land where they are a perfect fit.

Pre-employment testing software objectively gauges candidates’ personality, aptitude, traits and skills (to name a few) to help organizations make well-informed decisions. While some software are especially designed to test soft skills, such as problem solving, communication, organization, etc., others are developed specifically for particular position-based skills testing for roles such as technical writers or retail/sales managers.

Following are some companies that are providing pre-employment testing solutions:

So the question is! What should companies aim to achieve from using pre-employment tests?

Well, it is necessary that companies set realistic goals and expectations for what a pre-employment testing software can do for them. Recruiters shouldn’t use tests to replace their hiring process but only to streamline and improve it. Plus, the other elements, such as education, resume, interviews, job experience need to be also taken into consideration along with the pre-employment tests.

The truth is, when implemented, administered and evaluated properly, pre-employment tests can make your entire hiring process a breeze and help you discover the very best candidates for your business.

How Gamification Can Enhance Your Candidate Experience – The Talent Games

[…] there are a lot of pre-employment testing and screening assessment tools out in the market that allow companies to showcase their employer brand, and significantly improve […]

Candidate Experience: Everything You Need To Know – The Talent Games

How To Prevent Cheating In Online Assessments – The Talent Games

Thanks for sharing this article. More and more companies use pre-employment assessment tools to compare the critical competencies of their candidates helping them to find the best match for the job and the organization.